DHI, Direct Hair Implant process is the most preferred method in terms of no incision, scarring and suture.  It is the placement of the hair follicles taken with the help of a special pen called Choi as much as possible. In this way, it is possible to achieve more natural looking and successful results.The most important feature of this technique is that the grafts will be transplanted in the region with help by choi pen without the need to open the incision. Thus, the number of roots that can be planted in the region will be increased.

First of all, made with the help of state-of-the-art devices your hair analysis, the structure of the hair, the density, the rate of keratin in your hair should be examined in detail for this operation. After deciding which hair transplant technique is appropriate for you the density of the donor area and the number of grafts are calculated if the appropriate technique is DHI. 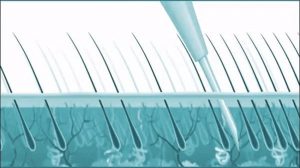 The hair is cut to a certain length before the operation and the frontal hairline is determined starting from the beard line. The donor area is anesthetized with the newest method of local anesthesia which is sedation.

The grafts are carefully collected with the aid of a special device from the donor area and left  for transplantation in a special protective solution.

After the area where the hair transplantation will take place is sedated with sedation;  operation is performed the grafts carried out by help with Choi pen starting from the frontal hairline.

The planting area is less bleeding during the operation and heals more easily because of  the incision is not made before planting, as in the other techniques.

Crusting starts 5-6 days after planting. The healing of the crusts takes about 20 days. After that, new hair starts to grow in 3 months. The completion of the whole process takes about 1 year.

Because of there is no incision, infection is much less likely. A more frequent and natural appearance is obtained since hair transplantation is done with Choi pen. The growth and development stages of the hair take place in a much shorter time because of as the grafts are removed and placed with tissue.